A technique that is finally getting more popular uses a high power laser to vaporize a sample. This creates a super heated plasma which gives off a lot of light. Shown below is a simple spectrograph to record the plasmas spectrum.

Below is a picture of the plasma spectrum from a sample of fossil bone. The laser is invisible so all the light comes from the specimen. The bright lines in the spectrum represent different elements. For more info see my poster under Publications.

Plasma plume (the laser is invisible) 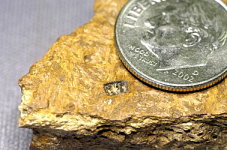 The picture on the bottom shows the small amount of material burned away. 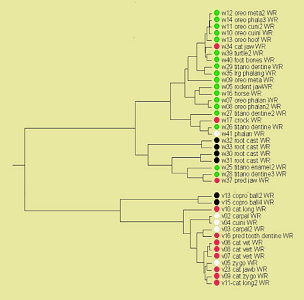 After the spectrums are analyzed, its possible to assemble them into a family tree to see which specimens are more closely related than others. The family tree here on the left is grouping fossil spectra from the White River group in eastern Wyoming. The green dots represent various bones from vegetarians and the red dots are predators. As you can see, most of the two groups are on their own tree branches suggesting that there is a different chemical between predator and prey bones.

Since there is some overlap with the predator specimens, higher resolution spectrums would possibly sort things out further. This research offers the possibility of identifying isolated bones as either carnivores or herbivores.